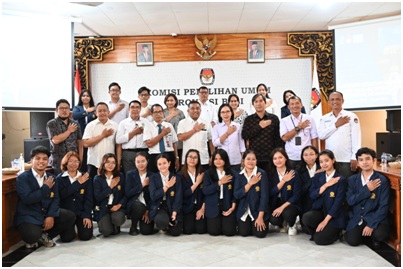 In order to continue the partnership relay that has been established between the Bali Provincial KPU and the Faculty of Social and Political Sciences at Udayana University (FISIP), today the MBKM apprentice student release event was held at the Bali Provincial KPU which was officially held in the 2nd Floor Meeting Room of the Secretariat Office KPU Bali Province. (9/1/2023)

This internship activity lasts for approximately 5 months from 1 August 2022 – 2 January 2023 or follows the number of KRS exchanged by each student. The apprenticeship or work practice was attended by 14 FISIP students consisting of 6 Political Science Study Program students, 6 Public Administration Study Program students and 2 Sociology Study Program students class of 2020. In practice, the 14 students were divided into 3 structural sections of the Bali Provincial Election Commission. which consists of the General Affairs and Logistics Section, the Election Administration Technical Section, Participation and Public Relations, Legal and HR as well as the Data and Information Planning Section. These students are then divided in each section as many as 2-3 people according to the needs of each section concerned.

In the second half of 2022, students have participated in a series of electoral activities organized by the Bali Provincial KPU. This activity, which is held either half day, full day or full board, is a form of implementation of the stages, verification of files, registration of political parties and other ongoing stages. The aim of this activity is to discuss, review, coordinate and evaluate the electoral stages that are being carried out in order to be able to create a work situation that is principled to be effective and efficient which is then able to produce maximum output. In general, students have participated in almost all of the series of activities held by the Bali Provincial Election Commission. These activities include coordination meetings, synchronization meetings, plenary meetings, technical guidance, monitoring and evaluation, training, outreach, press tours, media meetings and various other activities inviting the Regency/Municipal KPU and other relevant agencies.

As the final project, the Bali Provincial Election Commission intern students on this occasion are working on a socialization material project in the form of a game which is intended as a means of election socialization which is named "Lulu KPU". Lulu KPU comes from the ludo game which is packaged and modified by adding the role of a card that contains questions about election in it. This project also received a positive response from the Bali Provincial KPU which stated that this game was a further breakthrough from the election socialization media, especially in 2024 to be precise on February 14, Indonesia will carry out a vote as a manifestation of a democratic party. Therefore, socialization media like today are needed.

The release event was attended by Dr. Drs. I Nengah Punia, M.Sc., as the Dean of FISIP Udayana University along with the four members of the Bali Provincial KPU namely I Dewa Agung Gede Lidartawan as Chair of the Bali Provincial KPU, I Gede John Darmawan, I Gusti Ngurah Agus Dharmasanjaya and Luh Putu Sri Widyastini as KPU Members Province of Bali, Coordinator of the Political Science and Public Administration Study Program and the ranks of lecturers at FISIP Udayana. The release agenda consisted of remarks as well as opening remarks, submission of internship reports by one of the FISIP students, presentations and project simulations, delivery of message impressions, closing as well as official release of apprentice students and a group photo session.

Through this opportunity, the Chairperson of the Bali Provincial KPU, Agung Lidartawan expressed his appreciation for the intern students for their dedication during the 5 months at the Bali Provincial KPU which at the same time thanked and apologized to the intern students if there were any deficiencies during the apprenticeship. The established partners also plan to hold a national seminar in mid-2023. 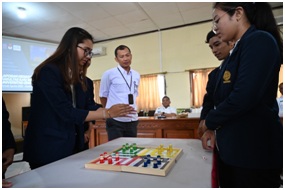